The Legitimacy of Emotions

Here's a small thing about me. Whether it was intentional or not one of the lessons that my parents instilled in me was to stay out of the way. By most physical measures I'm an average guy - not too tall and not too wide. However, I feel like a giant, hulking presence and am constantly shifting and adjusting to stay out of the way. If I'm sharing an elevator with someone I shrink into the corner and try to keep out of their way. Should a find myself sharing a bench I will do everything I can to make sure my companion has as much room to spread out as possible.

In short, I do everything I can to make sure that my shit doesn't spill over into or onto your shit. 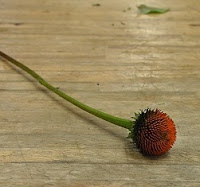 I'm also that way about emotions. Good feelings or bad are closely guarded secrets for me. I will do everything I can to make sure that no one around me feels obligated to acknowledge or *shudder* do something about my feels.

I say that to say this. In a strange way, I also do this to myself. That stay-out-of-the-way dynamic somehow got rooted in my internal life. Maybe it's best explained as an ego v. id thing. My id has the feelings but my ego doesn't want to mess with them so my id does it's best to keep them in a bottle. I'm not sure if that's apt. It's certainly nothing revolutionary. I think it might be an oversimplification of what Freud was talking about a hundred years ago anyway.

It's worth exploring, though, because as a depressive my emotions come from two distinct places. First, there's the legit source, life, that buffets all of us around. The resultant emotions seem somehow more real. There's cause and resolution and dealing with the situations in between. The other source is depression. This second source is harder to process because there's no cause to resolve; there's only the dealing.

The point is that it's nearly impossible to distinguish the two, especially when I'm in the depths of it. Do I feel bad because life is serving me a bowl of rotten radishes or because my depression has taken over? When I'm really down the question doesn't even occur to me. I can only think of how much I want it to stop or, worse, simply how much it hurts. Meantime, my id is doing everything it can to keep ego from knowing or outwardly reacting.

Therefore, a cycle becomes entrenched whereby all emotions are considered illegitimate until proven otherwise. Not only are they bottled up they are also considered irrelevant until they become too big to ignore. The predictable result is an eventual explosion that either causes me to collapse to cancer of the id or overreact when the ego is forced to act as a pressure valve. Both results are horrible.

I wish I had an answer. Maybe seeing it this way will help to deal. I suppose a way to look at it is to accept each emotion as legitimate. They are, after all. Whether caused by life or depression they have to be handled or they become too much to handle.

Maybe another bit of light in the darkness.
posted Thursday, April 04, 2019