That Space Between a Good Time and Bad Memory

I attended an industry event last night. It was great fun. I got to spend time talking to people who actually DO what I spend my professional time just writing about. I met members of the industry that I hadn't yet and spent time with people whom I truly admire for their craft.

The drive home was very happy as I reflected on the night. I'd had a great time, made new friends, and learned a little more about my industry. I thought about the different articles I could write, the magazines I could sell them to, what I could blog about, etc.

Then this morning I woke up and started to work on a blog post. That's when the social anxiety monster started whispering in my ear. He reminded me of a less than intelligent question that I asked. He pointed out how fat I must have looked next to some of the prettier people at the event. And he plainly stated that I clearly embarrassed myself and should never show my face around any of these people ever again.

If I let my typical pattern continue I'll have myself convinced that the night was a total disaster for me within a few days. By next weekend I should be in full on depression mode.

Email ThisBlogThis!Share to TwitterShare to FacebookShare to Pinterest
Labels: self doubt, social anxiety 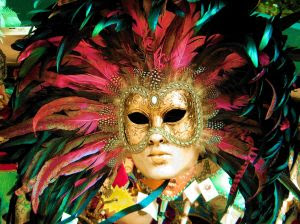 Just checking in to report that there's nothing to report.

My year isn't quite as bright and shiny as it was but I still haven't had any really dark days. Still off the SJW, too. It's odd, that. I just realized one day that I had forgotten to take it for a few days and I didn't miss it one whit. I still have a massive pill bottle of it in my desk drawer.

A few things have cropped up but they hardly rate as depressive episodes, just emotional bumps. The first was yesterday I had to get nasty with a magazine that owes me money for some work that I did last summer. I hated doing it and even though I was in the right I still felt small and mean for the rest of the day. That's an odd thing; I know I'm not alone in it. The more I am in the right and the greater the insult to me, the worse I feel when I overtly react to it.

Another is a dear friend lost her mother. As you might imagine I have few friends. This has less to do with my sometimes apparently abrasive personality and more to do with the fact that I simply let few people in. Well, she is one. She's quite a bit older than me and it wasn't unnatural for her mother to go. But I don't really know what to do. I called her when I heard and we talked for around 30 minutes. She discovered her mother collapsed in her (mother's) house so she had to live every minute of that horrible day. Now she's descended into her family as they deal with everything that has to be dealt with. I want to do something for her but I feel like I'll only be intruding. I may give her another call on Friday.

Finally, an old friend who's been gently trying to reconnect with me for months finally forced the issue. I cut him off years ago. I was having a very bad year with my family and … well, it's all stupid and the details are pretty boring if you didn't live them. Suffice to say that I was petty with him and was just being stupidly stubborn. So, he lives a continent away now and pinned me down via facebook. He sent a long, nice email just catching up. No mention of my pettiness. He ended the message by saying that I was someone for whom he felt great affection. Those were his words, great affection. I don't think anyone has ever said that to me. It was startlingly disarming especially when said between two heterosexual men. It made me regret the years.

But, like I said, nothing of the deep, black depression that has engulfed me in the past. Just life.

So that's my update for now. Cheers all!